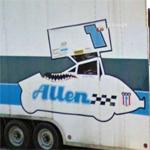 While growing up in Florida, Bobby watched his father compete in the early days of NASCAR. Bobby became an international karting champion at a young age and befriended Indy 500 driver Jim Rathmann, getting a job working in his shop. At the age of 20, Bobby moved north to Pennsylvania in 1966 with hopes to someday race in the Indy 500 himself.

Once he settled in to his new surroundings, he realized he could make a better living by racing 3-4 times per week on the area's dirt oval tracks, putting his dream of becoming an Indy driver aside. By the early 70's, he took to the road and traveled to as many races that he could find.

He was an original member of the World of Outlaws sprint car series that began touring the country in 1978. Unofficial totals have him winning 276 sprint car events, including 67 with the World of Outlaws. His biggest win was the 1990 Knoxville Nationals - the sport's annual crown jewel event. Allen was inducted into the National Sprint Car Hall of Fame in 1998.

Parked next to his hauler in this Street View scene is his grandson Logan Schuchart's hauler. Another grandson, Jacob Allen, is also an aspiring racer.

One of my favorite memories of Scruffy was seeing his hauler racing past our car on the way to a United Sprint Association race at Sharon Speedway in 1989. Just before getting to the track, Allen was pulled over by a local police officer. Not sure if he talked his way out of the ticket, but he did manage to unload at the track in time for the first warmup session.
Links: www.pennlive.com
1,008 views