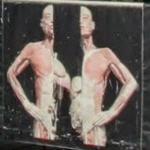 The show is operated by Premier Exhibitions which presents and promotes similar exhibits including "Bodies Revealed", and "Our Body: The Universe Within", and other entertainment exhibits.

The bodies are prevented from decay by a means of a rubberization process patented in the 1970s by anatomist Gunther von Hagens. The essence of the process is the replacement of water and fatty material in the cells of the body first by acetone and then by plastics, such as silicone rubber, polyester or epoxy res
Links: en.wikipedia.org
668 views