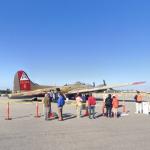 In April 1952, #44-83575 was instrumented and subjected to the effects of three different nuclear explosions. After a thirteen-year “cool down” period, #44-83575 was sold as scrap, bought, and subsequently restored. She then served as a fire bomber dropping water and borate on forest fires. Finally she was restored back to her original wartime configuration by Tom Reilly Vintage Aircraft. She now tours with the Wings of Freedom tour.
Links: www.collingsfoundation.org
562 views