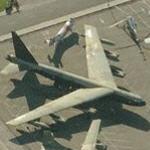 During the Vietnam War, this B-52D bombed North Vietnamese targets as a member of the 92nd and 307th Strategic Bombardment Wings. Both bomb wings flew from Anderson Air Force Base, Guam and U-Tapao Royal Thai Air Base, Thailand.

The United States Air Force retired our B-52D in March of 1983. This ended "Twilite D'Lite's” 26 year career that began on 8 November 1957 when she was delivered to the Strategic Air Command's 28th Bomb Wing, based at Ellsworth AFB, SD. This also signaled the end of bombers equipped with a manned tail gunner position; in subsequent models, the gunner was moved into the cockpit crew area where he controls the radar operated tail guns.

She flew to the Travis museum in August of 1983.
Links: www.travisairmuseum.org
1,050 views