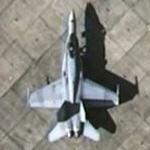 By kjfitz @ 2007-04-02 15:23:52
@ 29.828707, -90.025679
New Orleans, Louisiana (LA), US
The Boeing (formerly McDonnell Douglas) F/A-18 Hornet is a modern all-weather carrier-capable strike fighter jet, designed to attack both ground and aerial targets. Designed in the 1970s for service with the U.S. Navy and U.S. Marine Corps, the Hornet is also used by the air forces of several other nations. It has been the aerial demonstration aircraft for the Blue Angels since 1986. Its primary missions are fighter escort, fleet air defense, suppression of enemy air defenses (SEAD), interdiction, close air support and reconnaissance. Its versatility and reliability have proven it to be a valuable carrier asset, though it has been criticized for its lack of range and payload compared to its contemporaries.[1] A version exported to Finland and Switzerland without ground attack capabilities is called the F-18 Hornet.
Links: en.wikipedia.org
693 views