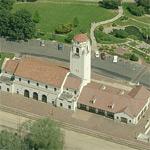 The Boise Depot was listed on the National Register of Historic Places on August 7, 1974, as the Union Pacific Mainline Depot
Links: en.wikipedia.org
601 views