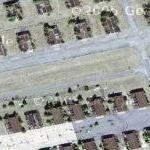 The Boeing Michigan Aeronautical Research Center (BOMARC) site occupies approximately 218 acres within the Range and Impact Area of the U.S. Army's Fort Dix Installation. The site was operated by and continues to fall under the jurisdiction of McGuire Air Force Base (McGuire AFB), which is located 11 miles west of the BOMARC site. McGuire AFB was authorized to use the land for construction of an anti-aircraft missile facility in 1958. Rows of missile shelters were constructed during the late 1950s and early 1960s to house BOMARC's nuclear warhead-equipped missiles. Key operations at BOMARC included missile fueling and defueling, missile maintenance, and power production operations. The BOMARC site is a secure site surrounded by locked chain fences, and signs are posted along the perimeter of the site prohibiting trespassing. The site is no longer used and no definitive plans for future use of the site have been announced.

On June 7, 1960, a non-nuclear explosion and fire occurred in BOMARC Missile Shelter 204. The fire burned uncontrolled for about 30 minutes. The force of the explosion destroyed the missile, its plutonium-containing warhead, and portions of the shelter roof; flames rose to 20 feet and black smoke blanketed the area. Fire fighting crews responded to contain the fire from the explosion. Following the accident, monitoring and decontamination activities were initiated. Response teams washed and spray-painted the shelter in an attempt to immobilize the contamination. The missile wreckage and the launcher from Shelter 204 were apparently removed and disposed of off site. The pit inside the shelter was filled with soil excavated from the rear of the shelter and the pit was subsequently sealed with concrete. To further immobilize the radiologic contamination outside the shelter, reinforced concrete was poured over the asphalt apron in front of Shelter 204 and 2 inches of asphalt also were placed along the bottom of the drainage ditch that leads from the shelter. A 6-foot chain link fence topped with barbed wire was installed around the site to restrict access (OHM 1998). The facility was deactivated in 1972 and all missiles were removed from the shelters. The BOMARC site remains within the domain of the Air Force (USAF 1992).
Links: www.atsdr.cdc.gov
5,880 views

Anonymous
@ 2005-07-26 14:38:01
This is an abandoned BOMARC nuclear missile base on Fort Dix property but under command of McGuire, the site of a plutonium-releasing explosion in 1960. Location: New Egypt, Plumsted Township, Ocean County, NJ. East of state Rte 539. For info on the accident and cleanup:
http://www.atsdr.cdc.gov/HAC/PHA/boeing/boe_toc.html
-skyeye