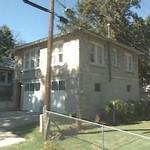 By Dania @ 2011-08-03 20:22:23
@ 37.051566, -94.5166
Joplin, Missouri (MO), US
The Bonnie and Clyde garage apartment is located at 3347½ Oak Ridge Drive in Joplin, Missouri, though it actually fronts on 34th Street. The apartment was the location where the Barrow gang hid out after a series of robberies in Missouri and neighboring states. After twelve days, neighbors reported suspicious behavior and on April 13, 1933, the Joplin Police Department raided the apartment.

Two of the police officers were killed by the fleeing fugitives. Undeveloped photographs, left behind by the gang, helped the authorities eventually stop the gang. Stolen merchandise tied the gang concretely to a robbery in Joplin during their stay there.
Links: en.wikipedia.org
1,971 views