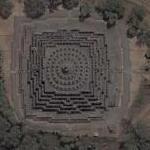 By noooby @ 2005-08-14 13:21:28
@ -7.607978, 110.205317
Indonesia (ID)
The brown blob at the center is Borobudur, the largest Buddhist monument in Asia: a cosmic mountain of stone covered in intricate stone carvings reminiscent of those at Angkor Wat. It is designed as a spiraling path for pilgrims, beginning at the base (now covered with earth to brace the pyramid) where scenes of the everyday give way to episodes from Buddha's life as you ascend. At the summit -- the purity of paradise is represented by increasingly simpler geometric shapes. All of this magnificence in a setting of lush jungle and multiple steaming volcanos! Climb to the top for a sunrise you will never forget.
Links: en.wikipedia.org
2,145 views