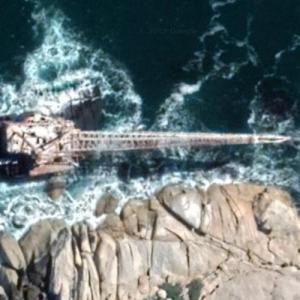 The Boss 400 was the biggest floating crane in Africa when the towing lines broke and hit the rocks in a storm.

Being a barge and having no main engines of its own it had to be towed to wherever it was working in the world. It had been used in the industry to pick up huge pipes.

The tug that had the towing operation was underpowered and not up to the job. They found themselves unable to cope with the conditions and radioed through to Cape Town harbor to ask for assistance.

Although two tugs were dispatched they were unable to get any lines onto the boss 400 due to the extremely rough seas. It is said a while later the original line snapped and the Boss 400 found itself blowing onto the rocks in Maori Bay were she has been lying ever since.

All 14 crew that had been aboard the Boss 400 were airlifted to safety.

At the time of the stranding, the Boss 400 was one of the most powerful crane barges in the world capable of lifting 1200 tons and valued at over 70 million US$. Due to the immense value of the vessel, a salvage team was dispatched but the back of the vessel was too badly broken and the salvage attempt had to abandoned.
Links: www.trekearth.com, www.artificialowl.net
9,756 views