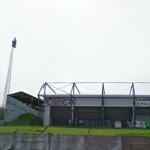 The Bosuilstadion hosted the 1964 European Cup Winners' Cup Final second leg, which sealed the victory of Sporting Clube de Portugal against MTK Budapest FC. It also hosted the UEFA Euro 1972 semifinal between Belgium and West Germany, won by West Germany. A large number of friendly international games of Belgium were played at the Bosuil, many of which against The Netherlands. However, the stadium has not hosted an international game since a friendly match Belgium against Brazil in 1988.
Links: en.wikipedia.org, virtualglobetrotting.com
444 views