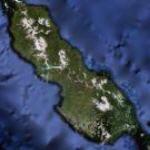 By kjfitz @ 2011-10-01 09:41:58
@ -6.156939, 155.396118
Arawa, Papua New Guinea (PG)
Bougainville Island is the main island of the Autonomous Region of Bougainville of Papua New Guinea. This region is also known as Bougainville Province or the North Solomons. The population of the province is 175,160 (2000 census), which includes the adjacent island of Buka and assorted outlying islands including the Carterets. Although Bougainville Island is geographically part of the Solomon Islands archipelago, the nation of the Solomon Islands is a separate state.
Links: en.wikipedia.org
2,739 views