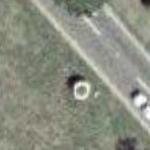 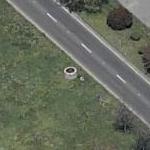 ...Braddock's Rock...is at the bottom of a well shaft protected by a steel manhole cover. The well shaft was dug when the approches to the Theodore Roosevelt Bridge were built.

In the early 18th century the Maryland shore of the Potomac along what is now northwest Washington was a marshy swampland, and the only solid ground was a large outcropping of rock just south of where Rock Creek empties into the Potomac. In 1755 British Major General Edward Braddock, with then Lt. Colonel George Washington at his side, moved his troops across the Potomac from Virginia and landed them on the outcropping of rock on the Maryland side. It was the beginning of one of the British campaigns in the French-Indian wars. Braddock later went on to disaster and death at Fort Duquesne.

When the capital city was under construction the nearest source of rock was the outcropping. It was blasted and cut for stone for government and private buildings and to line the C&O Canal until the outcropping was finally reduced to the size of a boulder, and the marshland was filled in.

Also this snippet from pubs.usgs.gov:

In colonial days, the first solid ground on the marshy north shore of the Potomac, now just north of the Lincoln Memorial, was an outcrop of Piedmont rocks that jutted into the river. This promontory served as the starting point for surveys establishing property lines for the early settlers. It was called Braddock's Rock, because the British General Edward Braddock and his red-coated soldiers, accompanied by Lt. Col. George Washington, are thought to have landed there in 1755 on their way to Fort Duquesne (now Pittsburgh). In time Braddock's Rock became a quarry, and it may have furnished stone for the foundations of both the White House and the Capitol.

In colonial days the first solid ground on the marshy north shore of the Potomac, just north of where the Lincoln Memorial is now, was an outcrop of Piedmont rocks which jutted out into the river. This promontory served as the starting point for surveys establishing property lines for the early settlers. On several old maps it is labeled "Key of All Keys," and for many years it bore a surveyor's benchmark. Its more popular name was Braddock's Rock reportedly because General Braddock and his red-coated soldiers accompanied by Lieutenant Colonel George Washington landed there in 1755 on their ill-fated journey to Fort Duquesne.

In time Braddock's Rock became a quarry. It is said to have furnished stone for the foundations of both the White House and the Capitol. Later, stone from Braddock's Rock was used in the construction of the Chesapeake and Ohio Canal. About 1832, when the canal was extended below Georgetown to connect with the Washington City Canal, nearly all that was left of the original outcrop of Braddock's Rock was blasted away. The riverside swamps have long since been filled and the land raised above the level of the original surface. All that remains of Braddock's Rock can still be seen enclosed in a circular granite-lined well south of the grounds of the old Naval Hospital, amidst the approach ramps to the Theodore Roosevelt Bridge. An iron grill covers the top of the well, and a ladder leads down to the rock, which is about 16 feet below the present land surface and is usually covered by several inches of water.

And finally, this NOAA photo shows the manhole cover in relation to the Kennedy Center.
Links: www.gswweb.org
2,922 views