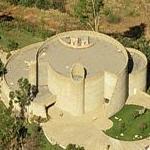 * Camp Khitomer in Star Trek VI: The Undiscovered Country
* Lore's Borg compound in the Star Trek: The Next Generation episode "Descent"
* The Command Center and Power Chamber for Mighty Morphin Power Rangers, Power Rangers: Zeo, and Power Rangers: Turbo
* The Lawnmower Man
* Marilyn Manson's video for "The Dope Show"
* Chris Brown's video for "Wall to Wall"
* The Rock & Roll History Museum in "Tenacious D in The Pick of Destiny"
* The rear of the building (and surrounding vegetation) was featured in a recent Lexus commercial.

* Exterior and outside (around the grounds) of the House of Book and the institute were used for Mystery Woman: Vision of a Murder.

* The prison Camp Holiday in the movie Wedlock with Rutger Hauer.

* In the Twilight Zone revival of the mid 1980's Episode Dead Run, a scene between the Administrator of Hell and a new truck driver takes place here.
Links: en.wikipedia.org
6,215 views