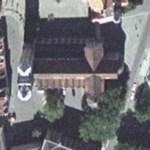 Henry and his consort Matilda are both buried in the cathedral. The limestone statues on the tomb in the nave are an idealised representation made a generation after their death, between 1230 and 1240.

Among the most important pieces on display in the church are a wooden crucifix by Master Imervard (second half of the 12th century) and one of very few huge bronze candlesticks with seven arms, from around 1170-1180.
727 views