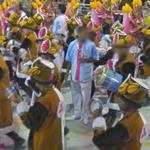 By adrbr @ 2010-09-30 08:43:51
@ -23.516265, -46.646162
São Paulo, Brazil (BR)
The Carnival of Brazil, properly spelled "Carnaval" in Portuguese, is an annual festival in Brazil held forty days before Easter. On certain days of Lent, Roman Catholics and some other Christians traditionally abstained from the consumption of meat and poultry, hence the term "carnival," from carnelevare, "to remove (literally, "raise") meat." Carnival celebrations are believed to have roots in the pagan festival of Saturnalia, which, adapted to Christianity, became a farewell to bad things in a season of religious discipline to practice repentance and prepare for Christ's death and resurrection.

Rhythm, participation, and costumes vary from one region of Brazil to another. In the southeastern cities of Rio de Janeiro and São Paulo, organized parades led by samba schools are influenced in aesthetics by Venice Carnival. Those official parades are meant to be watched by the public, while minor parades ("blocos") allowing public participation can be found in other cities. The northeastern cities of Salvador, Porto Seguro and Recife have organized groups parading through streets, and public interacts directly with them. This carnival is heavily influenced by African-Brazilian culture. Crowds follow the trio elétricos floats through the city streets. Also in northeast, Olinda carnival features unique characteristics, part influenced by Venice Carnival mixed with cultural despections of local folklore.
Links: en.wikipedia.org
1,087 views