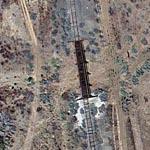 This remote location in the New Mexico desert was used in season 5, episode 5 where Walter White, Jesse Pinkman and Mike Ehrmantraut hatch an elaborate plan to steal Methylamine from a train and store it in a buried tank under the tracks.

This location is where they buried the tank and siphoned off the Methylamine from the train.
Links: www.imdb.com, www.amc.com
9,916 views