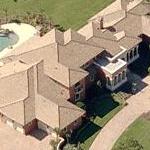 A seven-time Pro Bowl selection, Dawkins is a member of the Philadelphia Eagles 75th Anniversary Team and 20/20 Club.