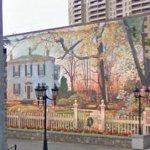 It depicts the property known a Briarly, home to the Montgomery family from 1870 to 1989
when it was demolished by developers; but, rather than become a theme of mourning and end,
the mural was conceived as an image of endurance and renewal, conveying a sense of comfort,
peace, home and family.

It was originally a frame Regency style cottage built on the south side of Dundas,
just east of T. Montgomery's Inn.

In the 1850's it was greatly altered to have an Italianate appearance.

Although the heritage community lobbied to have the home (also known as the Gunn house)
from maintained and restored, Etobicoke Council defeated a motion 7 to 6.