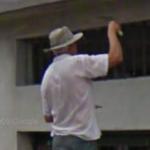 By adrbr @ 2011-03-29 17:44:51
@ -19.93657, -44.037166
Contagem, Brazil (BR)
A bricklayer or mason is a craftsman who lays bricks to construct brickwork. The term also refers to personnel who use blocks to construct blockwork walls and other forms of masonry. In British and Australian English, a bricklayer is colloquially known as a "brickie".

The training of a trade in European cultures has been a formal tradition for many centuries. A craftsman typically begins in an apprenticeship, working for and learning from a master craftsman, and after a number of years is released from his master's service to become a journeyman. After a journeyman has proven himself to his trade's guild (most guilds are now known by different names), he may settle down as a master craftsman and work for himself, eventually taking on his own apprentices.
Links: en.wikipedia.org
513 views