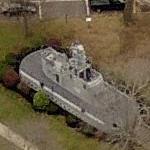 By kjfitz @ 2007-08-15 17:25:03
@ 43.081976, -70.738505
Portsmouth, New Hampshire (NH), US
Disaster struck on May 23, 1939 when the Portsmouth submarine, USS SQUALUS sank off the Isles of Shoals during sea trials (approximately 12 miles from the Shipyard) in 240 feet of water becase the main induction valve fails to close. The USS SCULPIN, a sister ship of SQUALUS, located SQUALUS on the bottom and rescue vessels and workers began to pour in from Boston, New London, and Washington. The McCann Rescue Chamber was rushed from New London and the first of the survivors were brought to the surface on May 24. After several attempts and much trouble, SQUALUS was finally raised on September 13 and towed to the Shipyard. She was put out of commission two months later, rebuilt and recommissioned as USS SAILFISH just a year after she had sunk. The bridge and conning tower of SAILFISH are now at the Shipyard as a memorial to the 26 officers and men lost on SQUALUS. For more Shipyard history, click on our History link on this page.
Links: en.wikipedia.org
6,799 views