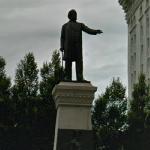 By Mike1989 @ 2013-03-08 13:13:53
@ 40.769402, -111.891145
Salt Lake City, Utah (UT), US
The Brigham Young Monument is a bronzed historical monument located on the north sidewalk of the intersection at Main and South Temple Streets of Salt Lake City, Utah. It was erected in honour of pioneer-colonizer, Utah governor, and LDS Church president Brigham Young who led the Mormon pioneers into the Utah Territory in 1847. The base of the twenty-five-foot monument has the bronze figure of an Indian facing east and that of a bearded fur trapper facing west, both of which preceded the Mormon settlers. On the south side is a bronze bas-relief of a pioneer man, woman, and child, while another bronze plaque has a list of the pioneers who arrived in the Salt Lake Valley on July 24, 1847, and their equipment.

The Brigham Young Monument was first displayed at the Chicago World's Fair in 1893. It stood briefly afterwards on Temple Square and was then transferred centering the intersection of Main and South Temple streets in 1897, where it stood until 1993, when it was moved a few yards north to its present location.
Links: en.wikipedia.org
565 views