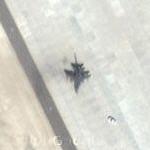 By kjfitz @ 2009-03-14 11:06:56
@ 25.917484, 50.586199
Sheik Isa Air Base, Bahrain (BH)
The Panavia Tornado is a family of twin-engine combat aircraft, which was jointly developed by the United Kingdom, West Germany and Italy. There are three primary versions of the Tornado; the Tornado IDS (Interdictor/Strike) fighter-bomber, the suppression of enemy air defences Tornado ECR (Electronic Combat/ Reconnaissance) and the Tornado ADV (Air Defence Variant) interceptor. It is one of the world's most sophisticated and capable interdiction and attack aircraft, with a large payload, long range and high survivability.
Links: en.wikipedia.org
788 views