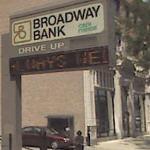 The failure of Broadway, which was unable to raise the $85 million it needed to remain independent, will cost the Federal Deposit Insurance Corp. $394.3 million.