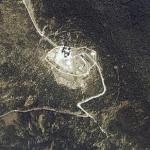 The Brocken has always played a role in legends and has been connected with witches and devils; Goethe took up the legends in his Faust, in which he also referred to the mountain.

Today the Brocken is part of a national park and hosts a historic botanical garden of mountain plants, founded in 1890. A narrow gauge steam train takes visitors from Wernigerode to the railway station at the top. The mountain features numerous hiking trails.

FM-radio and television broadcasting make major use of the Brocken. The old TV tower has an observation deck, open to tourists.
Links: en.wikipedia.org
1,075 views