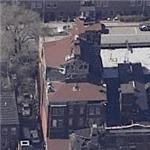 By kjfitz @ 2008-02-04 14:38:29
@ 40.685802, -73.961719
New York, New York (NY), US
Broken Angel or the Broken Angel house is a building located at 4/6 Downing Street in the Bedford-Stuyvesant neighborhood of Brooklyn, New York, at the intersection of Downing and Quincy street. The house is a neighborhood institution and was featured prominently as a backdrop in the film Dave Chappelle's Block Party. Numerous articles have been written about the building and its unique architecture. As a result of a fire on October 10, 2006 the New York City Department of Buildings declared the building dangerous and issued a vacate order to its owner Arthur Wood and his wife Cynthia. When the Woods defied the vacate order by staying in the building, they were arrested and taken from the building in handcuffs .

On January 11th, 2007 it was announced that Arthur Wood had partnered with local real estate developer Shahn Andersen to renovate Broken Angel, build a new addition to its side, and convert the building to residential condominiums and artist space.

Brooklyn artist Arthur Wood originally purchased the 4-story brick tenement building in 1972 for $2,000. He lived in the house with his wife Cynthia and raised their son Christopher who is now a stone carver. The artist explored ideas about design and vernacular architecture with improvised construction to add new floors and rooms to the original building, to the point where the structure reaches 104 feet, or about 9 stories above the sidewalk. The site has been compared to Watts Towers in Los Angeles for the ad hoc construction and is acknowledged for its value as folk art and as part of the cultural heritage.
Links: en.wikipedia.org
1,589 views