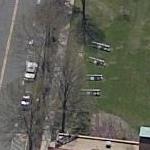 The visitor to the Washington Navy Yard may wish to start at The U.S. Navy Museum, where displays of weapons, models, and illustrations give a graphic idea of the weapons of the era of smoothbore artillery and of the way in which they were used. The Museum's collection includes a number of bronze and iron artillery pieces on period carriages, from a Dahlgren bronze boat howitzer to the massive iron 42-pounder gun -- a monster weapon for its day -- used by the privateer General Armstrong in an epic engagement with the British at Fayal during the War of 1812.

On leaving the Museum, walk around the right side of the white wooded house (building 1), and then north -- away from the waterfront -- on Dahlgren Avenue, named in honor of the famed inventor of the shell guns which served so well during our Civil War. You will see the first group of bronze ordnance on the left side of the street, between the street and the side of the Museum building.

As you examine these pieces, look for such things as size and proportion. Some of these weapons seem quite small to those of us accustomed to the big artillery pieces of our own time. Yet these were first line arms in their time. Most of the pieces seen here were made for the governments of Spain, France, Venice, or the United States and have some form of official identification. Earlier pieces were rather flamboyant and bear fairly elaborate inscriptions and national emblems. Royal guns might bear the arms of the king for whom they were made, as well as those of the official -- his title varied from one country to another -- who supervised the manufacture of the kings cannon. Ordnance of this time might also bear mottoes and inscriptions identifying the gun-founder who cast the piece and the date it was made. These earlier weapons were often given individual names, and a number of these will be seen here. As later bronze ordnance became more sober and functional in form, so did its ornamentation. The royal arms were replaced by a cipher, a crowned script monogram based on the initial of the kings name. Classical learning was still very much alive, and these royal ciphers were done in Latin. Thus, "C VI R" stood for Carolus Sextus Rex - King Charles the Sixth. One gun cast in Revolutionary France bears a large cipher, tantalizingly worn away to a point where it can be overlooked at first glance. The chase of the piece shows the motto "Liberte, egalite;" presumably, the cipher is the "RF" of the new French Republic. A later howitzer, made for the United States Army in 1858, simply bears a small "U.S." to indicate its nationality.
Links: www.history.navy.mil
778 views