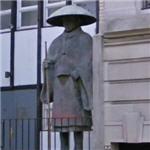 Ten years afterward, a Japanese industrialist took the statue and shipped it to New York City, where it was erected outside of a storefront Buddhist temple on Manhattan's posh Upper West Side. It's still there today. According to its plaque, the bombproof Buddhist serves as "a testimonial to the atomic bomb devastation and a symbol of lasting hope for world peace," although not many people know about it. "
Links: www.roadsideamerica.com
706 views