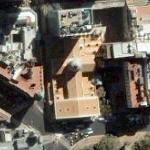 The Cathedral of Buenos Aires was rebuilt several times since its humble origins in the 16th century. The present building is a mix of architectural styles, with a 18th century nave and dome and a severe, 19th century Neoclassical façade without towers. The interior keeps precious 18th century statues and altarpieces, as well as abundant Neo-Renaissance and Neo-Baroque decoration.
Links: en.wikipedia.org
533 views