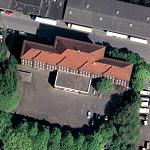 By clumsy182 @ 2010-11-29 23:26:35
@ 53.541826, 10.047963
Hamburg, Germany (DE)
On the night of April 20, 1945, 20 Jewish children who had been used in medical experiments at Neuengamme, their four adult Jewish caretakers and six Red Army prisoners of war (POWs) were killed in the basement of the school. Later that evening, 24 Soviet POWs who had also been used in the experiments were brought to the school to be murdered. The names, ages and countries of origin were recorded by Hans Meyer, one of the thousands of Scandinavian prisoners released to the custody of Sweden in the closing months of the war. Neuengamme was used as a transit camp for these prisoners
Links: en.wikipedia.org
436 views