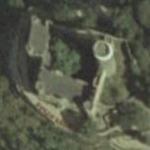 Burg Maus (meaning Castle Mouse in German) is a castle above the village of Wellmich in Rhineland-Palatinate, Germany. It lies on the east side of the Rhine, north of Castle Katz in Sankt Goarshausen and opposite Burg Rheinfels at Sankt Goar across the river.

Construction of the castle was begun in 1356 by Archbishop-Elector of Trier Bohemond II and was continued for the next 30 years by successive Electors of Trier. The construction of Burg Maus was to enforce Trier's recently acquired Rhine River toll rights and to secure Trier's borders against the Counts of Katzenelnbogen (who had built Castle Katz and Burg Rheinfels). In the latter half of the 14th century Burg Maus was one of the residences of the Elector of Trier.

Unlike its two neighbouring castles, Burg Maus was never destroyed, though it fell into disrepair in the 16th and 17th centuries. Restoration of the castle was undertaken between 1900 and 1906 under the architect Wilhelm Gärtner with attention to historical detail. The castle suffered further damage from shelling during World War II which has since been repaired. Today Burg Maus hosts an aviary that is home to falcons and eagles, and flight demonstrations are staged for visitors from late March to early October.
Links: www.burg-maus.de
682 views