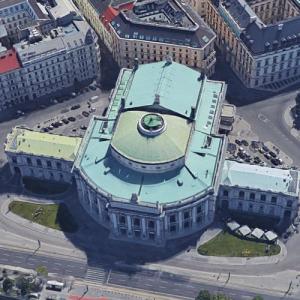 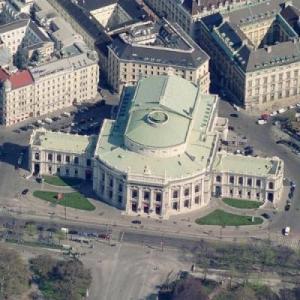 By DonMartini @ 2006-02-10 07:25:13
@ 48.21023045, 16.36162875
Vienna, Austria (AT)
The Burgtheater also known as 'Burg' or 'Haus am Ring' (House at Ring boulevard) is situated in Vienna's first district. In 1741 Empress Maria Theresia handed over an unused dance-parlour to a theatre-company named Sellier. In 1888, the company moved into a closeby house designed and erected by Gottfried Semper and C. von Hasenauer. Since then, this building was used as theatre house. The beautiful facade, whose white marble has recently been cleaned, is adorned with statues of famous writers like Goethe and Schiller and allegoric figures depicting love and hatred.

Inside, the Burgtheater provides a festive atmosphere for great cultural events.

The Burgtheater has obtained a world-wide reputation for brilliant dramatic art and is one of the first theaters of German-speaking Europe. Over the years, its theatrical company of more or less regular members has worked out a traditional style and speech characteristic of Burgtheater performances ('Burgtheaterstil').
Links: www.burgtheater.at
1,700 views