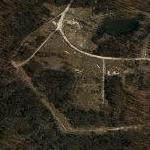 By cfanone @ 2005-07-19 12:43:37
@ 41.703844, -87.912683
Palos Hills, Illinois (IL), US
This is where the worlds first nuclear reactor is buried. It was the former site of resarch labs for Argonne National Labratory(3 miles west), previously called the Chicago Metallurgical Lab. The area with the roads is where the labs were located, however they were demolished and cleaned due to leakage of radioactive waste and other chemicals. The teardrop shaped clearing to the north is the burial site of the worlds first nuclear reactor. This area is more commonly known as Site A and Plot M respectively.
Links: www.gjo.doe.gov
5,121 views