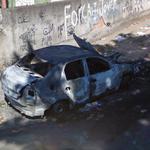 By adrbr @ 2010-12-03 16:05:54
@ -22.843866, -43.284777
Rio de Janeiro, Brazil (BR)
In November 25, 2010, the Special Ops Squad (BOPE) together with the Brazilian Navy, invaded the Favela Vila Cruzeiro, in Rio de janeiro, in order to set an UPP (Portuguese: Unidade de Policia pacificadora, English: Pacifying Police Unit) at the Favela. During this operation 31 people were dead but the majority of the drug dealers fled to the neighboring Complexo do Alemão. The next day, in retaliation, the drug dealers ordered that dozen of cars were to be burned around the city. Due to this event, the Secretary of homeland security José Mariano Beltrame, backed by Rio's Governor, authorized the military to send an ultimatum to the hidden criminals at the complexo do Alemão, to either they surrender and put down their weapons, or the BOPE together with the Brazilian Army and the Brazilian Navy would invade the area, what could escalate the violence and bring casualties. The criminals refused to surrender and sent threats to the military, by radio. Two days later, 3000 men invaded the Complexo do alemão with rifles, battle tanks and armoured cars. Despite the threats by the criminals, little resistance was found, and the military took over the area in few hours. After the invasion, an initial search was conducted and tons of drugs (cocaine and marijuana) were found, as well as weapons, robbed cars and motorcycles. As of November 30, 2010, the operation is ongoing and the main objective is to find the remaining criminals that can be hidden.
Links: en.wikipedia.org
707 views