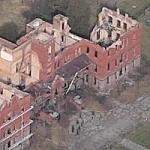 The Ammendale Normal Institute is a Victorian structure of an eclectic character, with design influences from the Queen Anne, Italianate, and Second Empire Revival schools of architecture. The two-story brick building sits on a high stone foundation; the roof is a mansard, alternately pierced with gable-roofed dormer windows and gables. The main (east) facade is over 100 feet long, consisting of a main block with projecting wings. The main block was completed in 1884 and the wings, continuing the style of the house, were added four years later. A 90 foot long chapel wing extends from the rear facade and terminates in a semi-octagonal apse. Like the main block, the chapel has a high stone foundation, but has a gable roof. The main entrance is marked by a gable-roofed entrance porch with a segmentally arched entry way and patterned brickwork in the gable. Behind the porch, a four story tower projects above the roofline. The tower has a bracketed cornice that carries an ironwork balcony; above the cornice is a framed bell cote with a steeply pitched, dormered hipped roof. The third story window head repeats the segmental arch of the porch entryway; the front story elevation has a niche for a Madonna and Child statue. Flanking the tower are two gables, which break through the main roof cornice, repeating the vertical emphasis of the tower. Between the entrance porch and each of the wings is a 2-story gallery supported by a row of iron columns with decorative bracketing. The railings are of patterned ironwork. The wings both have central gables with patterned brickwork. The central, gabled portion of the wall surface projects forward slightly, and windows are grouped to give emphasis to the central section of each wing. The window heads are segmentally arched, with the arches projecting slightly from the wall surface and connected by string courses. The entryway arch is formed of molded brick, as are the balustrades of the steps to the porch. Both the dormer windows and the iron columns use a star motif, the star being the symbol of the Christian Brothers. The interior has been altered to meet changing demands for space. St. Joseph's Church, southeast of the school, is a small brick church building typical of the late 19th century. The sidewalls have pointed arched windows, small brick buttresses, and double hung sash. The low entry porch is at the center of the main facade, the double doors topped by a transom. At the center of the gable is a circular window set in a panel formed by a pointed arch. At the eaves, bargeboards are supported on their lower end by brackets which, in turn, rest on a beltcourse. The entrance porch has similarly carved work in the gable and the lower end of the rafters are supported on brackets. Along the sidewalls, the rafter ends are cut in an ogee shape.

The Ammendale Normal Institute has been the home of the Christian Brothers since 1880, when they moved their novitiate from Calvert Hall in Baltimore to a rural site. The first novitiate, constructed in 1880, was replaced in 1884 with a building whose style more closely matched St. Joseph's Church, which had also been built in 1880, but with Queen Anne detailing. In 1888, the flanking wings were added, and the building took on its present appearance. It was one of the largest--perhaps the largest--building in Prince George's County at the time, and enabled the Brothers to carry on several schools in a single structure. Architecturally, the Normal Institute is an outstanding example of the eclectic styles of the 1880s. This building, constructed in a rural environment, shows an awareness of stylistic trends of the period. The presence of a structure of this quality, style, or scale is unusual in Maryland outside the urban centers of Baltimore and Washington.
Links: www.marylandhistoricaltrust.net
3,536 views

Anonymous
@ 2014-09-25 11:53:09
I use to live on the property with the Cummberland family. With Peggy and Mr Cummberland and Annie and Donald. I was married to John. We lived in the house by the chapel close to the cemetery. We use to go in the big house and listen to the sprits.