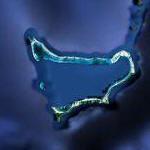 Butaritari was a place of residence for Robert Louis Stevenson in his quest for a new life and the subject of a subsequent story. In his book In The South Seas he devotes the majority of the second half to his observations and history of Butaritari and Makin.

Butaritari atoll was the site of the Makin Raid in August 1942, when two companies of the 2nd Marine Raider Battalion landed from the submarines USS Argonaut and USS Nautilus, as a feint to draw Japanese attention away from the planned invasion route through the Solomons. While they annihilated the local garrison, they failed in their initial objectives of taking prisoners and gathering intel.
Links: en.wikipedia.org
871 views