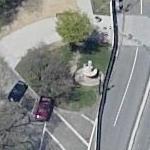 The 8-foot-high fountain is composed of a marble shaft of simple Neo-classical design rising from an octagonal basin of Tennessee marble. Today, the sculpture suffers from poor landscaping and proximity to roads. The sculpture on the fountain consists of two low-relief panels on the sides of the shaft. On the south side appears a military figure with sword and shield, representing Military Valour and Major Butt. On the north side is a relief panel containing the figure of an artist with palette and brush, representing Art and Francis Millet. Both Butt and Millet, so well known in Washington cultural and social circles at the time of their death, have been forgotten today.

This piece of commemorative art may serve many as an introduction to Francis Millet. Accompanying his surgeon father to the Civil War, Millet served as a drummer boy to a Massachusetts regiment and later served as a surgical assistant. A brilliant student at Harvard, he became a reporter, then city editor, of the Boston Courier. From a pastime of lithography and portraiture of friends, he decided to devote himself to art. Entering the Royal Academy of Fine Arts at Antwerp, Belgium, he won an unprecedented silver medal in his first year and a gold medal in the second. A constant traveller, Millet kept his newspaper contacts open, and during the Russian-Turkish War he represented with distinction several American and English newspapers. He was decorated by Russia and Rumania for bravery under fire and services to the wounded. Millet's literary talents led him to publish accounts of his travels and, besides writing short stories and essays, he translated Tolstoy's Sebastopol.

Millet's work as a decorative artist includes the murals of the Baltimore Customs House, Trinity Church of Boston, and the Capitol Buildings of Wisconsin and Minnesota. His paintings are found in the Metropolitan Museum, New York City, and the Tate Gallery, London. In addition, his administrative skills, won him acclaim as superintendent of decoration at the World's Colombian Exhibition in Chicago (1893), and as organizer of the American Federation of the Arts for the National Academy. At the memorial meeting for Millet, Senator Elihu Root said: "He must have been born with a sense of the beautiful and a love for it, for he devoted his life to it....He was one of the most unassuming and unselfish of men....He was a man of great strength and force, decision and executive capacity....He always pressed on to the accomplishment of his purposes, purposes in which self was always subordinate...."

Archibald Butt, noted as the influential military aide to President William Howard Taft and President Theodore Roosevelt, was born into a prominent Augusta, Georgia, family. After his graduation in 1888 from the University of the South in Tennessee, Butt began a career in journalism, first writing for the Louisville Courier Journal and later as a reporter in Washington for a group of Southern newspapers. While working in Washington he became secretary of the Mexican Embassy with General "Matt" Ransom, Confederate officer and former United States senator from North Carolina.

In 1898 Butt left Mexico to enter the United States army as a lieutenant during the Spanish-American War, and decided to make the military a second career. He served in the Philippines from 1900 to 1906, then in Cuba before becoming military aide to President Theodore Roosevelt in 1908. Butt's health began to deteriorate in 1912 because of his attempts to remain neutral during the bitter personal quarrel between Roosevelt and Taft. Needing rest, he took six weeks' leave from the White House and sailed for Europe with his close friend Francis Millet, who was en-route to Rome on business at the American Academy which he directed. They were returning to Washington on the SS (sic) Titanic when that ship struck an iceberg. Both men were last seen giving up their life preservers to women passengers shortly before the ship sank in the icy Atlantic waters.
Links: www.encyclopedia-titanica.org
1,246 views