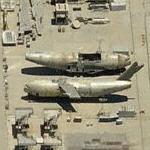 By kjfitz @ 2007-07-06 17:00:06
@ 33.825797, -118.153927
Long Beach, California (CA), US
The Boeing (formerly McDonnell Douglas) C-17 Globemaster III is an American strategic airlifter manufactured by Boeing Integrated Defense Systems, and operated by the United States Air Force, the British Royal Air Force and the Royal Australian Air Force. It has also been selected by the Canadian Forces with a planned 2007 delivery.[3] NATO also has plans to acquire the airlifter.

Anonymous
@ 2010-02-02 10:30:17
The title for this photo is incorrect. These are not partially assembled C-17's. They are fully assmebled C-17 test fuselages. Basically they were beat up and pulled on and flexed to ensure that the structure of the aircraft was sound and would endure a full lifespan. One of them was towed recently through the streets of Long Beach and Seal Beach and loaded on a ship. It went to an air force base to be modified as an aircraft loading test bed. It sat unused for a few years and had an owl nest in it up in the rear of the fuselage below the vertical stabilizer that we had to make sure was abandoned before we could ship it.