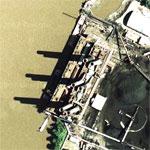 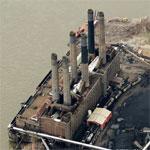 By jbottero @ 2008-03-01 19:10:22
@ 38.603786, -90.185748
Sauget, Illinois (IL), US
Its six towering smokestacks make the retired Cahokia Power Plant one of the city's most distinctive landmarks, yet most residents rarely see this stupendous building up close. Its 52-acre site alongside the Mississippi River in Illinois is private property and closed off. Reaching the river bank on the opposite side in St. Louis requires navigation of lengthy dirt roads and and underbrush.

The Union Electric-operated plant first came online in 1923; it was built in stages and completed in 1939. Designed to burn Illinois coal, it was the largest power plant in the Mississippi Valley when it opened. Its boilers consumed a ton of coal every 30 seconds, and over 600 million gallons of water a day. Underwater cables fed the electricity produced to the thriving city across the river. The plant later converted to oil burning.

By 1976 the plant had been replaced by newer facilities and was decommissioned. Union Electric sold off the property in 1979. Extensive asbestos insulation used in its construction remained a problem for at least a decade, acerbated by careless salvage work.