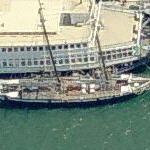 Californian was built from the ground up in 1984 at Spanish Landing in San Diego Bay. She was launched with great fanfare for the 1984 Summer Olympic Games in Los Angeles. In July 2003, the governor signed a bill into law designating the Californian as the official tall ship of the State of California. She is the only ship to carry this prestigious title.
Links: sdmaritime.org
894 views