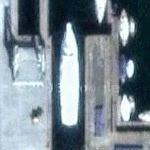 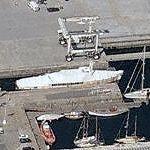 By Hinkkanen @ 2006-10-06 09:03:42
@ 46.150755, -1.15166
La Rochelle, France (FR)
Jacques Cousteau's research ship Calypso laid up at La Rochelle. The Calypso, originally a wooden-hulled minesweeper built for the Royal Navy (HMS J-826), was launched on 21 March 1942. In the late forties she served as ferry between Malta and Gozo and in 1950 she was bought by Irish millionaire Thomas Loel Guinness who leased her to Cousteau for a symbolic one franc a year. A barge accidentally rammed Calypso and sank her in the port of Singapore in 1996. She was raised, and towed to the Maritime Museum of La Rochelle in 1998 where she was intended to be an exhibit, but after languishing and rusting there for six years Calypso was sold to Carnival Cruise Lines for the symbolic sum of one Euro.

The map shows her under protective awning that can also be seen in pictures here.
Links: en.wikipedia.org
1,312 views