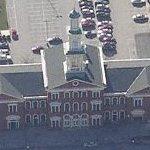 The first blood of the Civil War was shed outside the station’s northern portals on Pratt Street. Union troops, on foot from the President Street station to Camden Station, clashed with angry southern sympathizers, leading to the first Civil War battle. Abraham Lincoln also passed through the building on several occasions, once on his way to Gettysburg.

In 1971, the B&O vacated what by then was America’s oldest big city train terminal in continuous use, and Camden Station was sold to the Maryland Stadium Authority, which had plans to integrate the station house along with the adjacent warehouse into the new stadium complex.

The Stadium Authority would refurbished the exterior, while the interior was gutted, for the opening of Oriole Park at Camden Yards in 1992. However the building would sit unused for more then a decade after Camden Yards until 2005 when, following a renovation, the station would reopen as a sports museum, Sports Legends at Camden Yards.
Links: baberuthmuseum.org
900 views