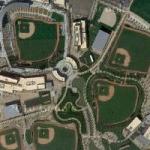 The park is also home to the Arizona League Dodgers, who moved to Camelback Ranch with the Major League team in 2009.

The stadium name is derived from the longstanding name of the property it is built on."

"Camelback Ranch opened on March 1, 2009 for the spring training home opener between the Los Angeles Dodgers and the Chicago White Sox."