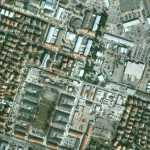 By giove @ 2009-04-03 08:28:47
@ 45.543449, 11.5818
Vicenza, Italy (IT)
Caserma Ederle (Camp Ederle) is a United States Army post located in Vicenza, Italy. The post is the headquarters of the Southern European Task Force as well as of the 173d Airborne Brigade. Caserma Ederle serves as the headquarters of U.S. Army Garrison Vicenza, an umbrella for all U.S. properties in Vicenza. It is also the garrison for several important European-based U.S. military units. The post is named after Major Carlo Ederle, an Italian hero of World War I and recipient of the French War Cross, among other military honors.