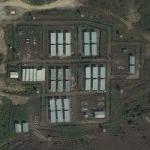 By Mike1989 @ 2013-03-25 08:11:14
@ 19.938184, -75.09652
Guantanamo, Cuba (CU)
Camp X-Ray was a temporary detention facility at the Guantanamo Bay detention camp of Joint Task Force Guantanamo on the U.S. Naval Base in Guantánamo Bay, Cuba. The first twenty detainees arrived at Guantanamo on January 11, 2002. It was named Camp X-Ray because various temporary camps in the station were named sequentially from the beginning and then from the end of the NATO phonetic alphabet. The legal status of detainees at the camp, as well as government processes for trying their cases, has been a significant source of controversy; several landmark cases have been determined by the United States Supreme Court.

As of April 29, 2002, the official Camp X-Ray was closed and all prisoners were transferred to Camp Delta.
Links: en.wikipedia.org
2,579 views