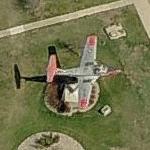 The Tutor is perhaps best recognized as the aircraft used by the Snowbirds airshow team.
Links: en.wikipedia.org, www.roadsideattractions.ca
523 views