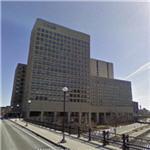 NDHQ actually comprises a collection of offices spread across the National Capital Region, however it is most commonly identified with the Major-General George R. Pearkes Building at 101 Colonel By Drive in Ottawa.
Links: en.wikipedia.org
710 views