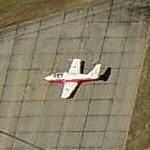 The 431 Air Demonstration Squadron is under the jurisdiction of the Canadian Forces Air Command. Approximately 80 Canadian Forces personnel work with the squadron full-time; 24 personnel are in the show team that travels during the show season.