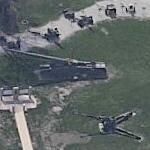 Rock Island Arsenal is an active U.S. Army factory, which manufactures ordnance and equipment for the Armed Forces. It is located on Arsenal Island in the Mississippi River.

The Arsenal Museum interprets the history of Arsenal Island to include the building of Fort Armstrong in 1816, the Black Hawk War, the Confederate Prison Camp 1863-1865, and the establishment of the Arsenal in 1862. The theme of the Museum is People, Processes, and Products. The exhibits depict the people involved in the Island's history, the manufacturing processes used at the Arsenal, and the equipment that the Arsenal has produced.

Also, included at the museum is an extensive collection of military firearms, both foreign and domestic. Over 1100 weapons are currently on display.
Links: www.ria.army.mil
2,593 views