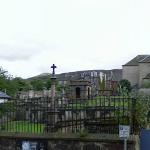 The most celebrated burials at the kirkyard are the economist Adam Smith and the poet Robert Fergusson, but many other notable people were interred in the cemetery, including Ebenezer Lennox Scroggie, the inspiration for Dickens' character Ebenezer Scrooge, and possibly David Rizzio, the murdered private secretary of Mary, Queen of Scots although it is highly unlikely that an Italian Catholic would be reinterred in a Protestant graveyard 120 years after his death.
Links: en.wikipedia.org
673 views